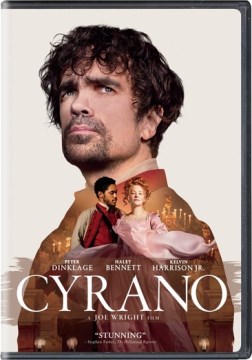 You’ll Enjoy It If: Tragic romances appeal to you; you were a fan of Moulin Rouge; you like indie rock music; historical fiction is your cup of tea.

A man ahead of his time, Cyrano de Bergerac dazzles whether with ferocious wordplay at a verbal joust or with brilliant swordplay in a duel. But, convinced that his appearance renders him unworthy of the love of a devoted friend, the luminous Roxanne, Cyrano has yet to declare his feelings for her, and Roxanne has fallen in love at first sight with Christian. Wordsmith Cyrano helps Christian woo Roxanne through the writing of love letters, which Christian lacks the wit to do alone, and for Cyrano lacks the bravery to admit.

Background to the Text

It may surprise you to know that I am a massive fan of musicals, and I am likewise obsessed with French romances. As a medieval scholar, the original play Cyrano de Bergerac falls outside of my educational scope. It was written and performed first in 1897 by playwright Edmond Rostand. It is loosely, and I really mean loose, based on real-life Savinien Cyrano de Bergerac, a French author and duelist who lived in the early to mid-1600s. The 19th century, when Rostand was writing, was a time of great reflection towards the past. Other French authors of similar scope included Alexandre Dumas, whose work in the middle 1800’s often revisited the early 17th century. Dumas may be familiar as the creator of The Three Musketeers, whose protagonist d’Artagnan finds himself enmeshed in the French political machinations of Louis XIV, otherwise known as Louis the Great or Louis the Sun King, who was not only the longest-standing French monarch but the longest standing monarch of a sovereign country that has been recorded. Cyrano and d’Artagnon as literary characters coexist, missing each other at the apex of their narratives by about 20 years, in large part due to the fascination with the 17th century evidenced by authors of the French 19th. Louis the Sun King had a grand reign, was responsible for the building of the beautiful palace at Versailles, and brought France into a new era of political and naval power. It’s no wonder that many authors have returned to his lifetime as a setting for heroic storytelling.

Cyrano, like d’Artagnan, is a literary hero. He belongs to a subgenre of chivalric and heroic adventure tales referred to as the swashbuckler genre. Swashbucklers are adventurous heroes, excellent swordsmen, attractively dressed, chivalrous and manly, and always willing to rescue a damsel or avenge a misdeed. They are gentlemen and rogues, shifting away from the knightly heroes of medieval romance and into flamboyant bravado; though the romantic ideals of courtly love are present in the male-female relationships evidenced on-page. They were also incredibly likely to be attractive, as chivalric heroes have always been, owing to the slowly changing idea that physical beauty represented the internal; heroes of the middle ages were attractive as a sign they were indeed heroic. Cyrano offered a literary hero who was not, or at least did not perceive himself to be, physically attractive, despite his intense honor, swordsmanship, military strategy, chivalrousness, and brilliant wordplay.

Since Rostand’s debut of Cyrano de Bergerac 125 years ago, it has been performed, translated or adapted an incredible number of times. While the early productions of the play were not musical, a number of operas and musical adaptations have been produced since 1899. In 2018 Erica Schmidt adapted the play for the stage once again, working with the Indie rock band The National to take the long monologues and turn them into passionate musical numbers. One of the difficulties of adapting a work from the past lies in the use of language to evoke meaning; modern audiences may not recognize some of the double-meanings or outdated words that may have appeared in early translations. This is kind of like how if you listen to a Shakespeare play, even though those are written in Modern English like we speak today, the way language was deployed was different enough to render it more complicated to understand at first glance. I think the best adaptations capture the spirit of a work, and Schmidt has done so with the shift into musicality. The success of Schmidt’s stage adaptation, which starred her husband Peter Dinklage in the titular role, as well as the film’s Haley Bennett as Roxanne, did well enough to garner an Off-Broadway run in 2019 New York, culminating with the film adaptation directed by Joel Wright.

There is a lack of depth to the film that I would attribute to the necessary part of adapting a work that involves making cuts. The original play is quite long, with many moments that add no greater depth to the plot or characterization. But the play itself also allows for insight into the character of Cyrano, without which his profound anxieties surrounding his love for Roxanne are less understandable. In the play itself, as well as prior adaptations, Cyrano’s deformity is his large and bulbous nose, an attribute he cannot hide. Schmidt chose to forgo the use of prosthetic noses in her own version, a fact of which Dinklage was quite happy, saying in an interview with the NY Times: “And then Erica removed it [the false nose], and I thought I had to play this part because now it’s about a guy who doesn’t know what to do in the face of love, who has nothing to blame but himself.” This is what comes through in Dinklage’s portrayal of Cyrano, the knowledge that his fear, his anxieties and his hesitancies are all about him. It is clear throughout the film that no other character sees him as lesser. An early scene in the play has been removed—in it, Cyrano meets Christian for the first time, who throws multiple nasal-based insults at the man before Cyrano realizes Christian is the man for whom Roxanne has fallen and says something to that effect. Christian, realizing Cyrano can help him, of course, immediately apologies. Without this interaction at the start, however, the relationship between the two on film is, if not friendly, at least always cordial. Dinklage’s Cyrano is not, in actuality, lesser than his peers or unworthy of Roxanne because of his stature, just like Peter Dinklage is not any lesser because he happens to have achondroplasia, a type of dwarfism. In another interview, this time with The Independent, he says,

A lot of people think my height is the reason Cyrano is insecure about showing his love to Roxanne, but it really isn’t, it’s more universal than a nose or whether someone is shorter than someone else. It’s that feeling we have of being unworthy of love and insecure about who we are.

If you approach the film from this perspective, then I think it does an absolutely wonderful job. I’d say this is in no small part owing to the beautiful cinematography, choreography and musicality of all involved. One of my favorite moments comes midway through when Roxanne is reading the love letters sent to her, and we can watch her fall in love in return. The scene itself is completely appropriate; she is fully clothed, the lyrics of her song are without raunchy detail, and she’s not reading all the words of the love note itself to us. Instead, we see a woman out of breath, flustered, heart racing, as the parchment slides across the fabric, as her lace curtains drape across her face. It’s sensual in a way I haven’t seen much of, reminding the audience of the power words can have to woo and romance. Just look at this incredible still from within the scene: 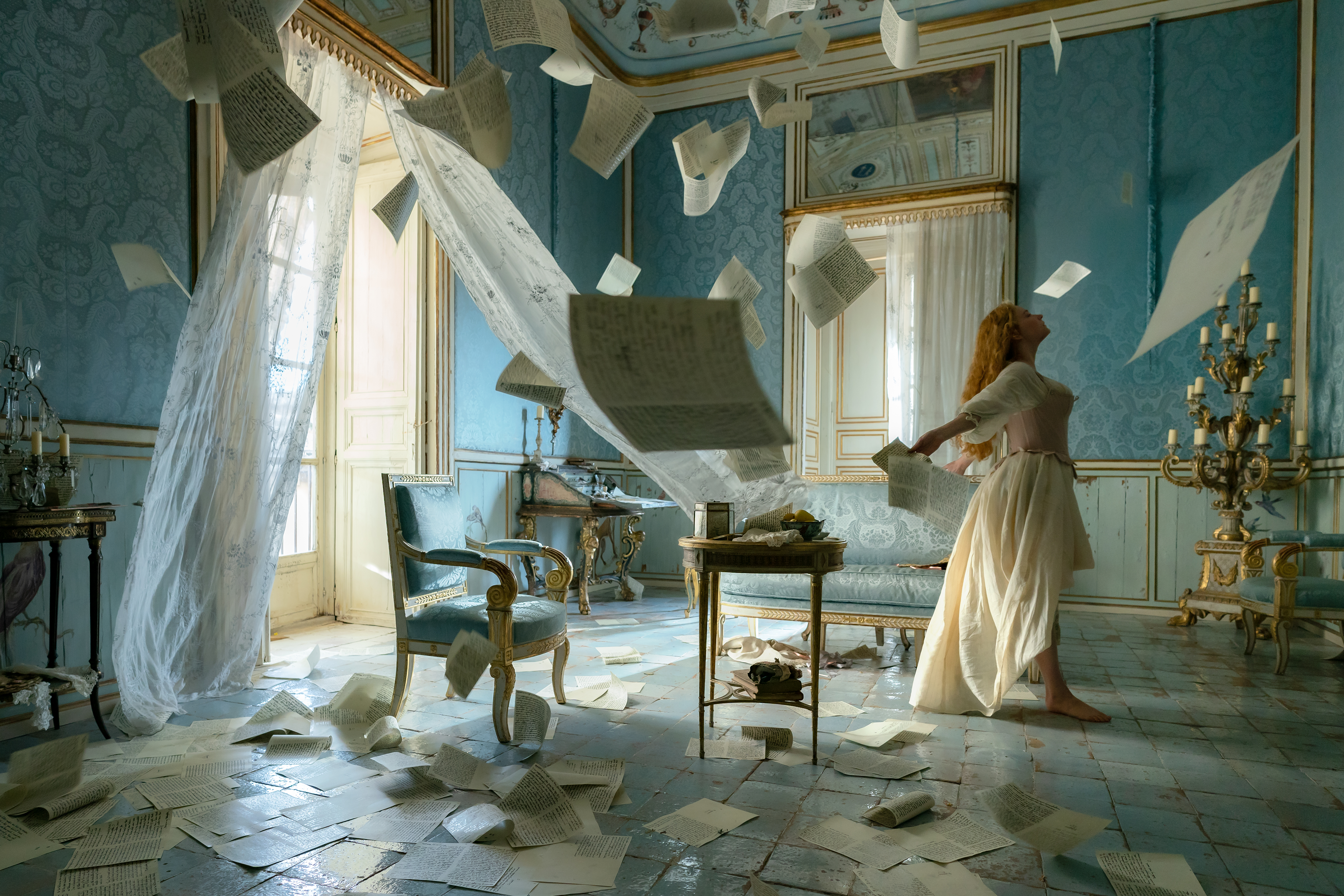 The song in question is called Every Letter, and while the first part belongs to Roxanne as played by Haley Bennett, the middle picks up with Dinklage narrating and also includes Christian’s own part. The combination of the three main voices against the backdrop of a full symphony paired with electric guitars pulses like a heartbeat, increasing as Roxanne’s does, and I was obsessed.

I can understand why someone might not enjoy the film, and I can understand from a literary and analytical standpoint how there could be concerns about the ways in which the film interacts with the source material. However, I thought it was gorgeous and compelling, and I cared about what happened to Cyrano and Roxanne. Haley Bennett’s voice mesmerized me, and Peter Dinklage has always been someone I deeply admire as an actor. However, the reviews from audiences are largely good, and I personally enjoyed the movie because I took it for what it was, rather than the next piece in the long Cyrano de Bergerac tradition. I’m going to think about disability studies for a while now and the impact of Dinklage playing this role with no nasal prosthetics or changes. I think it makes Cyrano so much more understandable in his anxieties; I, too, would be terrified of rejection from such a smart, beautiful and talented woman.