Film Review: Everything Everywhere All At Once

Everyone I knew that has seen Everything Everywhere All At Once in theaters raved about it. They told me to go see it immediately, but they couldn’t really tell me about the movie without spoiling some aspect of it. Now, I find going to the movie theater to be one of my least favorite things to do, even well before the COVID-19 pandemic, so I waited until the DVD came out, and I could check it out from the library. I just watched the movie with my spouse, who loves bizarre movies, and I have not emotionally recovered. Let me attempt to talk about this movie without spoiling the depth behind the plot. 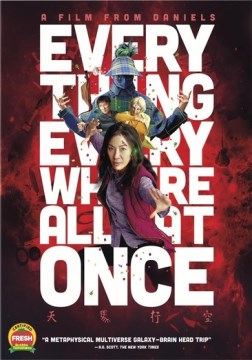 MPAA Rating: R for violence, some sexual content, and swearing

Summary: An aging Chinese immigrant is swept up in an insane adventure where she alone can save the world by exploring parallel universes and connecting with the lives she could have led.

Directed & Written By: Dan Kwan and Daniel Scheinert. The duo is also responsible for writing and directing Swiss Army Man in 2016, also an absolute trip of a movie. Grab the DVD for Swiss Army Man while you wait for a copy of Everything Everywhere.

Starring: Michelle Yeoh as the main protagonist. She’s incredible in everything she does. She, of course, gets to bring her vast experience with stunt work and martial arts scenes to the film. While not a trained martial artist herself (I know, I was surprised, too), she does most of her own stunt work, and it definitely shows at this point in her career. Ke Huy Quan marks his return to film as her character’s husband, and he is the best part of the movie, in my opinion. Jamie Lee Curtis also has an incredible role to play throughout the film. And the breakout star would be Stephanie Hsu playing the daughter, Joy.

Eyan’s Rating: 5/5 stars, in each multiverse.

Request a Copy of Everything Everywhere All At Once

This is a movie that deals with incredibly heavy topics—multigenerational trauma, racism, homophobia, divorce, emigration, suicidal ideations, violence and rage. You have to commit to paying attention—because of the deep cultural connections to their home country, Evelyn (Yeoh) speaks in three languages throughout the movie. Having been born and raised in China, she speaks Cantonese with her father when he comes to the states, Mandarin with her husband and English with her daughter. While she moves between the three languages in the easy way native multi-language speakers do, if you aren’t watching the captions, you can lose some of the back and forth in those quiet moments. Especially the opening scene, which has Evelyn and her husband Waymond moving between Mandarin and English as they prepare for a tax audit on their company. Joy, who has been born and raised in America, struggles to speak Cantonese to her grandfather when he visits, falling back to simple words and English.

There’s also a high level of the absurd, which I think carries the profundity of the rest of the film. Some of the absurd moments include parallel universes—like the one where all humans have evolved with hot dogs for fingers—and some just include general ridiculousness. I will never look at everything bagels the same way, for example. I wish I could explain that without ruining one of the reveals, but the cleverness of that object being an everything bagel will never stop being funny.

Some of the absurd moments are clearly meant to be uncomfortable. Sometimes they go on for what feels like an extra-long moment. Verse-jumping—the term used for when a person can intentionally tap into the skills and knowledge of a parallel universe self—requires a “jump pad.” Basically, a jump pad is an action that is so improbable and strange that it allows the person to access the multiverse. Jump pad moments in the movie range from violent—there’s a moment with a stapler and a forehead—to the absurd—at one point, a character eats a stick of chapstick.

But the real strength of the movie is in the smaller moments, the interpersonal and the familial. Evelyn struggles as an adult without her father, who refused to be a part of her life when she married Waymond. She wants better for her daughter, but the continual pressure she puts on Joy only creates further, and further tension as Joy struggles against the vision of herself that her mother holds. There’s never a doubt in the storytelling that Evelyn loves her daughter; her “failures” as a wife and mother, according to the start of the film, stem from the constant need to work, to prove that she has value and that, as a result, her husband and daughter do, too. She is so obsessed with impressing her father that she cannot see what effect her own pressure is having on her daughter. The film never shows that to mean Evelyn is a bad person or a bad mother. Life is difficult and painful sometimes, and sometimes you hurt the people you love by accident. Likewise, the tension between Evelyn and Waymond is never used as a device to prove Evelyn is a horrible woman, just that she is an overwhelmed woman.

What carries the excitement of the film, I think, is the lack of intense CGI. Recent media has had a lot of CGI, and it can be distracting or dating. Think of Avatar for a moment. Remember how everyone raved about the realistic CGI in that one? Have you watched that recently? It’s just a cartoon, and had it been drawn in traditional animation style, maybe it would have held up a little better. Or what about the added scenes that Lucas Arts keeps putting into the Star Wars films? You can almost always tell when a scene was added, there’s something about the colors or something that just doesn’t match. I never had that moment in Everything Everywhere, and that was largely due to the lack of computer-generated special effects. I found this fascinating video where the directors and the head special effects person talk about what went into the making of the film. They had a team of only five people to create the entire film’s effects.

Ultimately, the film is incredible. Both absurd and profound, hilarious and devastating, I wept more than once during my viewing, gasped out loud at least one time and threw a pillow at my spouse when I was particularly blown away about one of the twists (it wasn’t on purpose, I was holding it, and then I had a whole body spasm apparently). I want to close with my favorite quote, because it won’t give away any of the plot, but it will drive home the message I took away from my viewing. I want to live my life this way, and I loved hearing these words as the kind of catalyst moment to the film’s resolution:

When I choose to see the good side of things, I’m not being naïve. It is strategic and necessary. It’s how I’ve learned to survive through everything. I don’t know. The only thing I do know is that we have to be kind. Please, be kind. Especially when we don’t know what’s going on.

-Waymond Wang, Everything Everywhere All At Once (2022)