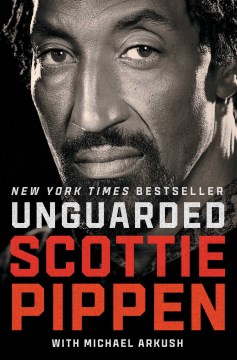 Find it: Physical copy on the 3rd Floor

Let me begin by saying that I am in no way, shape or form a sports fan. I can count on my hands the number of professional sports games I’ve sat through, and most of them were Rugby, which hardly counts as a popular American sport. And yet I grew up in the Chicago suburbs in the 90’s and can at least recognize the big names from the Chicago Bulls 1990’s powerhouse team. That is about as far as my knowledge extends, however. I know Michael Jordan’s name a bit more than the others, how could I not when he worked so hard to make himself a household name after his basketball career? But I haven’t kept up with following his projects, or the projects of the other men from that team.

And then I got the email blast from Anderson’s in Naperville that Scottie Pippen would be doing a signing of his recent book Unguarded. Well, I had made a goal for myself to read five biographies or memoirs this year—why not pick up something out of my wheelhouse and read about Scottie Pippen?

As is usual for me, I mostly avoided reading background information about Scottie Pippen before I started reading his book. I had seen a few comments online about the bitterness of his tone seeping through, and I felt like I’d rather read his words without the bias of too much knowledge. The prologue is clearly a reaction to the 2020 docuseries Michael Jordan produced and promoted, The Last Dance, and likely where criticisms of bitterness and rage stem from. And Pippen is angry, but I can understand it. Maybe I’m missing something, because I’m not a sports fan and barely understand the rules of basketball as it is. And yet, I know it’s a team sport, and no matter how spectacular one player on the team may be, he can’t do it alone.

I think there was no way for any memoir of Scottie Pippen’s, regardless of when it was written and published, to not focus so much on Michael Jordan. How could Pippen’s experiences on that team be written and not confront the differences between teammates? We know in our own workplaces we don’t always get along with everyone, why would a basketball team be any different? I think some of the criticism about bitterness is unfair and a result of the timing. Pippen may have written this in direct response to The Last Dance, but it also could have been in the works well prior, as he makes clear in the acknowledgement he’d been thinking about a memoir for some time. It would be unfair to say he is a man entirely filled with bitterness because I found his memoir to have a depth and breadth of emotion I was not expecting from such a high level athlete. I associate professional athletes with type A personalities, aggression and fire, not kindness and compassion. This is unfair of me, I’m sure. And yet when Pippen spoke of his family, I could tell how deeply he loved them. When he spoke of the profound effect Magic Johnson’s HIV diagnosis had on him and the basketball community, I could tell how deeply he respected and admired the man.

He still talks about the Bulls as “we” showing how deeply committed he remains to Chicago, despite being an Arkansas man born and bred. Even his negative commentary about Michael Jordan seemed to come from a place of frustration about the team. Yes, it’s clear Pippen felt he didn’t receive quite the acclaim he deserved, but he seems just as frustrated that the team as a whole wasn’t functioning as a cohesive unit while Jordan was remaining the focal point.

As a whole, however, he largely avoids speaking about himself outside of basketball, and while I understand that basketball created his fame, I’d be interested in the kinds of things he spends his time on now. I know his divorce from his ex-wife, whom he speaks of fondly in the memoir, if briefly, was contentious and dramatic. In its entirety, Unguarded leaves the impression that Scottie Pippen isn’t so much a man as he was a character, a superhero basketball star sidekick to a hero who isn’t so heroic. It’s like Michael Jordan was Mr. Incredible and Scottie Pippen was Syndrome, except without Pippen, we have no way of knowing if the Bulls, and Jordan, would have been so similarly successful.

I know a lot more about basketball than I did prior to reading this book, and while I certainly have no intentions to read more basketball star memoirs, I think Pippen’s book makes me think about teamwork, hard work and the importance of telling your own story.